“Tafpack-Premium”, often abbreviated as “TPP”, is an asphalt modifier to improve the rutting resistance.

Price in Vietnam Dong per Kilogram, Packing in 25kg / bag.

Asphalt Modifier as Countermeasure to Rutting 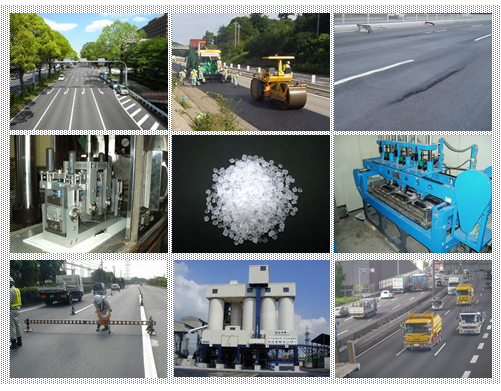 Development of transport infrastructure is absolutely essential for the development in economy of the country and the region. In fact, the traffic infrastructure like expressway has been increasing year by year in Vietnam. On the other hand, the traffic conditions on the roads pavement have become more by the increase in the traffic volume and large vehicles. On the heavy traffic roads, rutting becomes a serious problem at present. Therefore, further durability and sustainability are required for the asphalt pavements.

Based on our long term experiences that we have tackled this problem, there is a countermeasure to prevent the rutting problem. Here, we will introduce such technologies to the rutting, which we have carried out.

This causes a typical rutting on the asphalt pavement by the repeated traffic load at high temperatures. This occurs on pavement roads with many large vehicles but it depends upon the property of the asphalt mixture used as well. And it is easier to occur at an uphill road and an intersection, a bus stop. This is because the vehicles do a stop and slowdown on these roads.

This is the problem with the small waves to occur at regular intervals in the longitudinal direction of pavement roads. It is easy to occur in places where the vehicles repeat stop and braking frequently. And, it is occurred at a hill and a traffic jam route, an intersection this side. 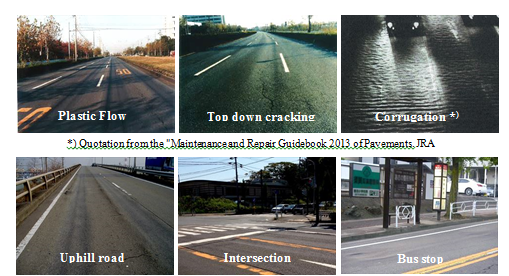 COUNTERMEASURE to RUTTING by TPP ( TAF-PACK-PREMIUM )

The modified asphalt mixture can be easily produced at any asphalt plants by using TPP. Furthermore, the usage is very easy, only to add TPP into a mixer of the asphalt plant. Moreover, the production of the modified asphalt mixtures is available at any existing plant, and other special devices are not needed. These merits are due to the merits of the Plant mix method.

Regarding the method of addition of TPP, both of the manual addition and the automatic addition are available. The points to take attention are the order of adding materials, mixing temperature and mixing time.

TPP is a plant mix type modified asphalt additive which has the excellent compatibility with asphalt and excellent modifying effects. 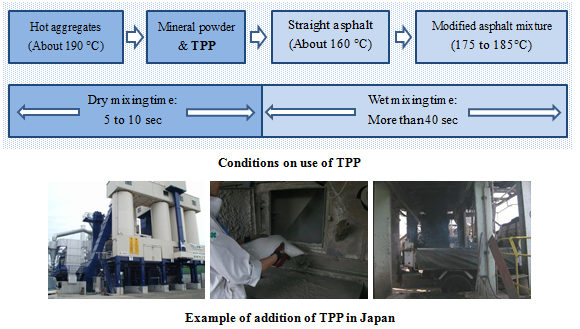 PROPERTIES OF ASPHALT MODIFIED BY TPP

The properties of the modified asphalt by TPP of more than 4% meet the Japanese standard for Modified Asphalt Type II. The examples of the properties of TPP asphalt are shown in the table below. TAF-PACK M is a premix type asphalt, it is shown as a reference.

In case of the asphalt modified by TPP of 5%, the properties can be categorized in the standard of PMB-II in Vietnam. PI in the table is an index indicating the temperature susceptibility of asphalt. And, it is hard to be affected by the temperature when its numeric is big. In the case of TPP 5% addition, the numeric of PI is very big. TPP 5% Modified asphalt has the excellent thermal properties, TPP 5% is recommended for the countermeasure to rutting. 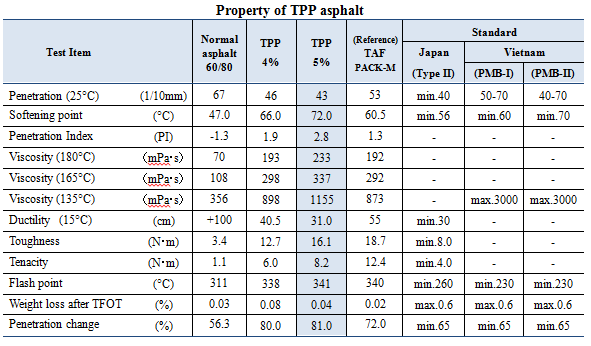 *) TPP can be blended into asphalt by a propeller mixer. However, mixing time shall be more than 1 hour.

These test results show the great efficiency of TPP of 5%. As a result, regarding the countermeasure to rutting, the use of 5% TPP is recommended. In case of this example, 5% TPP means that only 2.75kg of TPP, 55kg * 0.05, will be added to 1 ton asphalt mixture.

(Regarding wheel tracking test and dynamic stability, refer to APPENDIX). 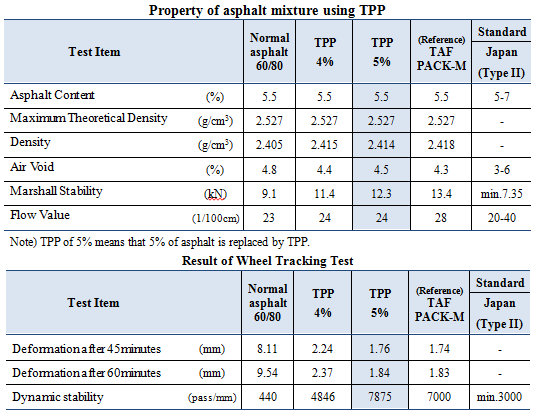 *) The effect of TPP is affected by a base asphalt to use. Therefore, you need to add TPP to an asphalt which you use, and confirm the effect of it.

OTHER COUNTERMEASURE TO RUTTING BY TAIYU

The challenge to the rutting problem has been started in 1979, and the first product, “TAF-PACK”, has been developed as an asphalt modifier. Up to now, this product has been improved over and over again. And, the original technology has evolved into TPM, TPS and TPP. Furthermore, there are special technology against the further severe rutting, which might not be improved by TPP and others.

In Japan, the asphalt mixture modified by TPP or TPM is generally used as a countermeasure to the rutting on heavy duty roads. This is because everyone knows that the method to use modifier is the most steady and reliable as a countermeasure to rutting through the long term experiences. However, TPM is provided only in Japan, because it is a pre-mixture type. And, TPS will be used when the high durability of porous asphalt pavements is required.

TAF-EPOXY is the epoxy resin for asphalt to significantly improve rigidity and flexibility. And, Semi-Flexible Pavement is the pavement in which the voids of porous asphalt pavements are filled with the special cement milk. TAF-EPOXY is applied at the parts with severe rutting like an intersection, it is also employed for the pavement on the bridge with steel plate deck. Semi-flexible pavement may be sometimes used for like bus stop because it can prevent the asphalt pavement from being melted by oil spilling out. 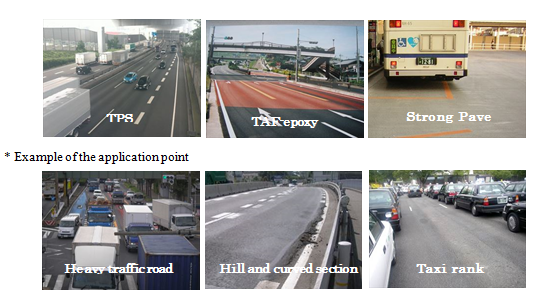 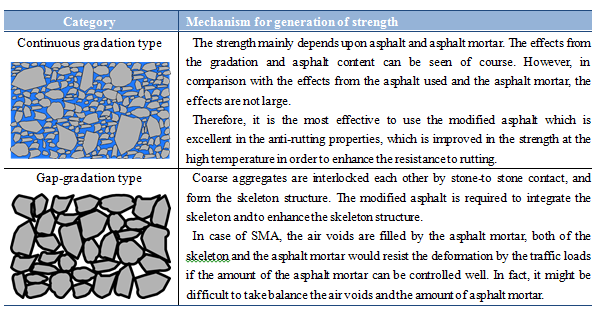