MIKAWA Port Bridge which has steel plate deck with the length of 300m has been constructed in Japan in 1979, and epoxy asphalt mixture has been adopted as a pavement material. Furthermore, epoxy resin has been used as a tack coat. In fact, this bridge has been opened to the general traffic in 1982. We have carried out some investigations on site, like a strain measurement by loading a dump truck, before being opened to general traffic. And, I‘d like to add that this pavement has been available with no maintenance for this 35 years although some cracking have arisen.

The data of the dump truck used for the on-site investigation are as shown in Table 2.1.

The location of strain gauges and loading positions were set as shown in Fig. 2.1 and Fig. 2.2. Further detail information would be obtained in reference [1] 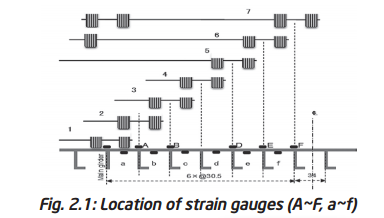 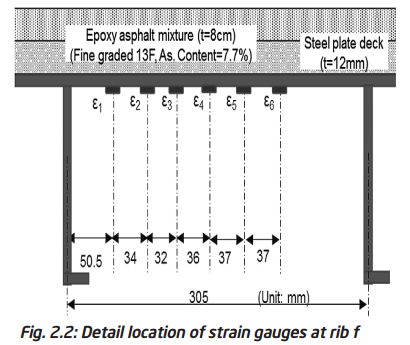 The calculation shall be based on “Euler’s Assumption” that the plane cross section shall incline with keeping plane after receiving bending force. The cross section model of the three layers structure is as shown in Fig. 3.1 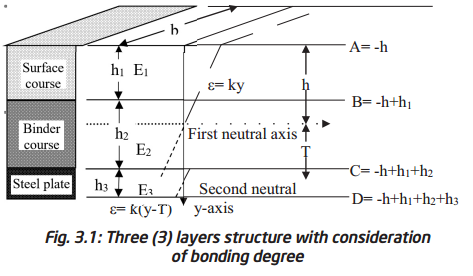 The strain and stress occurring in the three (3) layers composite beam can be shown as follows using the moment of inertia area, (J). (The position of the neutral axis is coordinate origin). 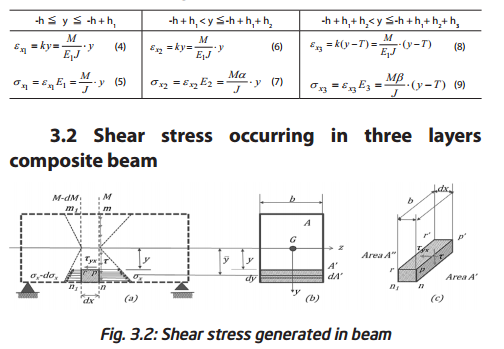 4. PROPOSAL OF STRUCTURAL MODEL FOR
PAVEMENT ON STEEL PLATE DECK

Behavior of the pavement on steel plate deck is thought as shown in Fig. 4.1. The supports on the ribs at both sides of tire is not fully fixed but the rotation would be restrained in proportion to the deflection slope. And, regarding the support between double tires, the relative displacement would arise.

If considering the behavior mentioned above, structural model is simplified as shown in Fig. 4.2. The characteristics of this Model are to have an elastic hinge at support A and to have an elastic support at support B. Therefore, the vertical direction movement in proportion to the reaction at support B would be allowed with this Model in addition that the free rotation at support A is restrained by the elastic hinge. The adoption of the elastic support at B support would result in lowering the whole rigidity of this structure. 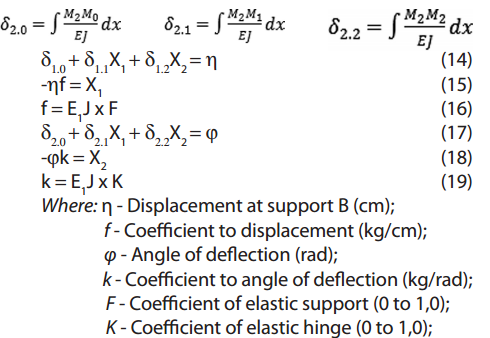 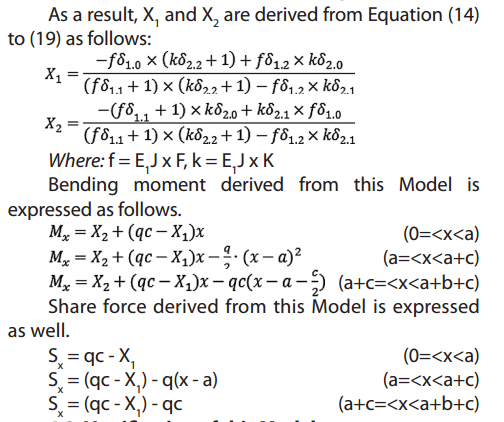 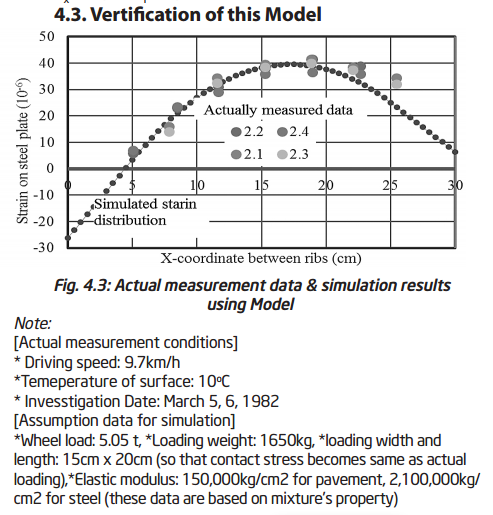 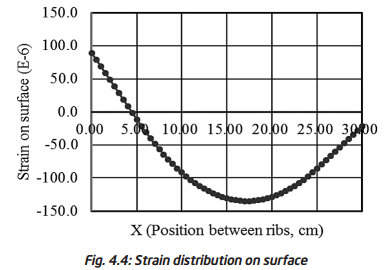 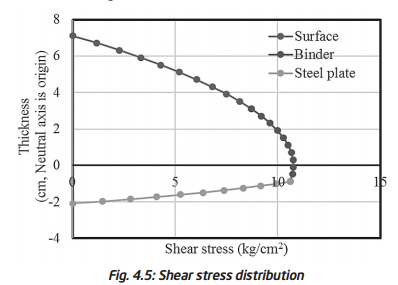 According to the simulation, in spite of cold season and relatively small wheel load of 5,05 tons, larger strain of about 100kg/cm2 works just above longitudinal rib. Furthermore, the shear stress as large as 11kg/cm2 is generating on the interface between pavement and steel plate. Regarding the coefficient of K and F, they represent the rigidity of the structure including pavement properties. If  the thickness of the steel plate deck is thin or the temperature of the asphalt pavement is high, the

rigidity of the whole structure should become smaller. In my idea, K would be from 0,02 to 0,035 and F would be 0,0003 to 0,0006, but further research would be needed. However, the most important thing is that the strain which would generate on the pavement surface or the shear stress which would generate between steel plate deck would be able to be calculated if employing this Model.

5. PAVEMENT ON STEEL PLATE DECK &
MATERIALS TO BE USED ON THANH LONG BRIDGE

According to the information on Thanh Long Bridge in Hanoi, the thickness of steel plate deck is 1,4cm, the  pavement has been paved by SMA using PMB 3 and the total thickness of two layers is 7cm. And, Bond Coat has been applied as a tack-coat between steel plate and pavement. 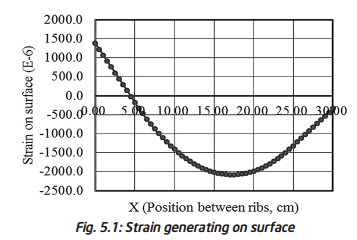 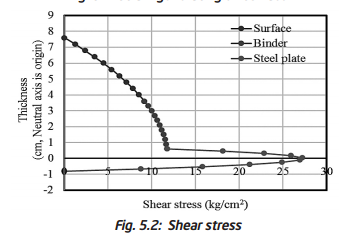 Based on the information about Thanh Long Bridge, we simulated the strain and the shear stress which would generate. Regarding the simulation, the calculation conditions will be set so as to meet actual situation in Thanh Long Bridge. The calculation results are shown in Fig. 5.1 and 5.2. Note: Simulation conditions are; Wheel road: 10 tons, Elastic modulus of SMA with PMB3: 10,000kg/cm2, Perfect bonding at interface

Simulation results show the maximum tensile strain above rib is about 1500*10-6. Furthermore, shear stress between steel plate deck and pavement is about 12kg/cm2. These simulation results would suggest that the pavement on Thanh Long Bridge is being suvjected to the severe stress and strain situation. Therefore, in order to prevent from various deteriolation like longitudinal cracking and slippage, the materials which would be able to endure such strain and stress situation should be employed on Thanh Long Bridge. In our experiences, only Epoxy asphalt mixture and Epoxy type tack-coat would be able to endure such severe conditions. We can not give you enough explanation due to the paper length limitation, we’d like you to refer to reference [3]. Here, only the data on fatigue characteristics of epoxy asphalt mixture is introduced in Fig. 5.3

Regarding the shear stress generated at the interface between steel plate and pavement, if conventional tackcoat would be employed, slippage like on Thanh Long Bridge should arise because shear stress itself is very big. Against this problem, we would like to recommend Epoxy
type tack-coat because it exerts very strong bonding strength more than 28kg/cm2 [3].

Acknowledgement
We appreciate this conference secretariats for giving us an opportunity to present on the structural simulaion about the pavement on Steel Plate Deck, which has not been tackled so far.
References
[1]. H. Nakanishi (March 2016), Structural design
Method for the Pavement on Steel Plate Deck, UTC seminar.
[2]. For example, R. Arai (1968), Applied
Mechanics, Gihodo.
[3]. Taiyu Kensetsu Co., Ltd., TAF-EPOXY & TAF-MIX EP,
Technical brochure