Solubility of TPP and SBS

Test results on Modification Efficiency and

Solubility of TPP and SBS

Rutting problems are getting serious and the effective countermeasures are required in Vietnam. Under the circumstances, the interest to the countermeasure is moving to the asphalt modifier used as the Plant-mixing type additive and in-house experiments and some test pavements have been tried at present. Because they can be used easily and the price is reasonable, the high effects are further expected. In this in-house experiment, TPP and SBS, which have been employed on national road route-1 in Khanh Hoa Province, Vietnam, are used, and the test results are reported.

In case of adopting the plant-mixing method, the modifiers used for this method need to melt on the mixing condition at asphalt plant, like at 180 °C and for about 45 second. Taiyu Company has built the specific in-house specification for the modifier as shown below. MFR (160°C, 2.16kg) : 2.0 – 5.0 g/10min And, Table-1 shows the test results on MFR for each material. Because the mixing temperature at asphalt mixing plant sometimes has fallen down to 160°C, the test temperature of MFR is set lower like 160 °C although the normal test temperature is set to be 190 °C. MFR of TPP is 2.3g/10min and it meets to Taiyu in-house specification. On the other hand, SBS can’t melt at 160 °C and even at 190 °C, MFR can’t be measured. Therefore, when SBS is used in Plant-mixing method, some risks that SBS might not be able to melt homogeneously into asphalt and to modify asphalt might remain. 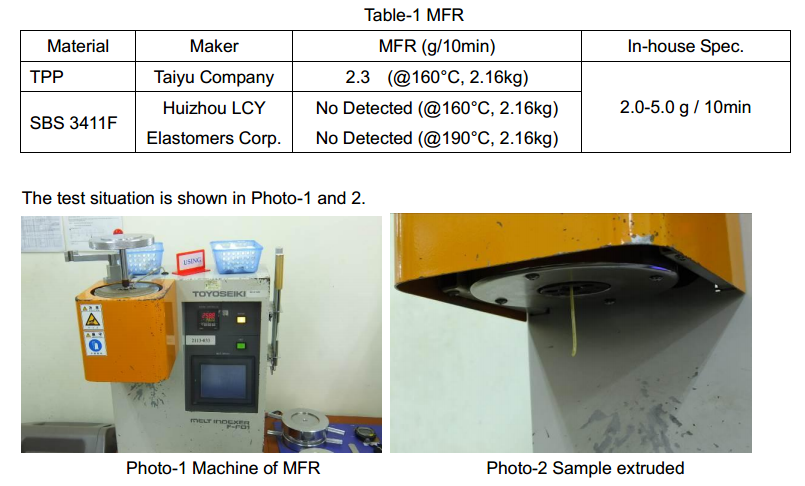 2-2 Influence of temperature on performance of asphalt mixture

In the field of plastic industry, there is a test named “Hot Press Test”. This test is carried out in order to visually check and evaluate the solubility and homogeneity of compounded materials. The test has been performed on the following conditions. 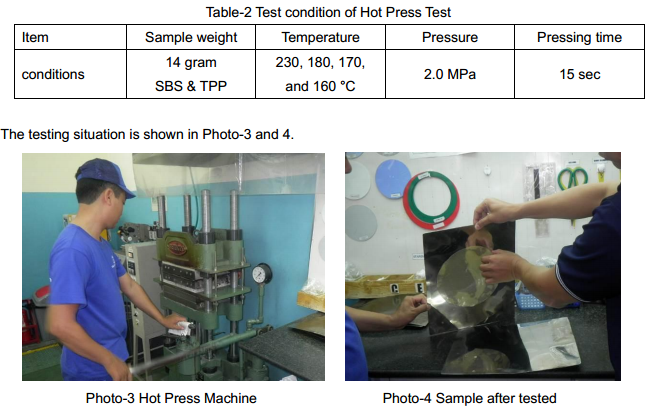 The test results shows that although SBS would be able to melt at 230 °C, it cannot melt at 180 °C. A  small amount of SBS seems to be melting at 180 °C. If we check the photograph strictly, however, we should understand that particles of SBS become softer and are just being crushed by pressure of 2.0 MPa. But, it is impossible to use SBS at 230 °C.

On the other hand, TPP is melting well even at 160 °C. That’s why we think we should respect the in-house standard for the modifier of asphalt, as shown in Table-1.

If there are many parts of unmelt SBS in the asphalt or asphalt mixture, it would cause other problems like cracking and pothole in the near future. We will show the test results which have been carried out at 170 °C and 160 °C, as well. The results are the same as the situation at 180 °C.

Regarding an asphalt mixer used for this experiment, there are two vertical shafts with a blade, and the two shafts have the function of rotation and revolution, and the maximum mixing capacity is 20 litters. In this case, the mixing has been carried out at the mixing temperature of 180 °C and mixing time of 50 seconds. The photographs are shown in Photo-9 and 10.

As you can see by checking Photo-9 & 10, the mixing energy of this mixer is significantly higher than a mixer which an actual asphalt plan installs because relatively big blades are equipped to only 20 liter volume vessel.

TPP and SBS of 5% to the total asphalt weight was added in dense graded asphalt mixture (13) with the same mix proportion, respectively, the modified asphalt mixture was produced in our laboratory. Using the small sized asphalt mixer for experiment (Photo-9), the asphalt mixture was prepared at the mixing temperature of 180 °C and the mixing time for 50 seconds. The specimen for the Wheel tracking test was prepared by roller compactor. Test results are as shown in Table-5.
 Dynamic stability (DS) of TPP mixture: 7,000 pass/mm, DS of SBS mixture: 4,500 pass/mm, DS of Straight asphalt mixture: 492 pass/mm.
 TPP excels much more in the rutting resistance than SBS as an additive for plant mixing method.
 SBS is far inferior in rutting resistance to TPP, but the rutting resistance of SBS is beyond expectation. It would be due to the mixer used for this experiments because this mixer has high mixing power.
 The difference would be due to the solubility of the additives used for the plant mixing method.

Note) Test conditions: weight of wheel: 686±10N, test temp: 60°C, in the air, passing speed: 42 pass/min. Dynamic stability is calculated from the difference in the deformation after 45 minutes and 60 minutes after starting the test.

5. Evaluation of the deformation of wheel tracking test. 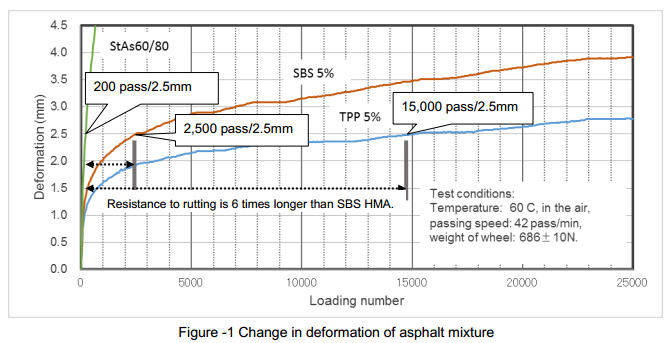 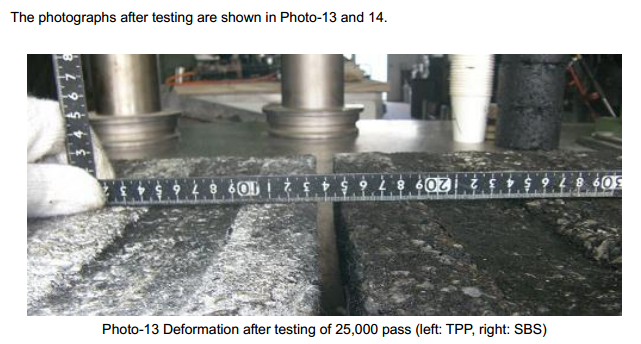 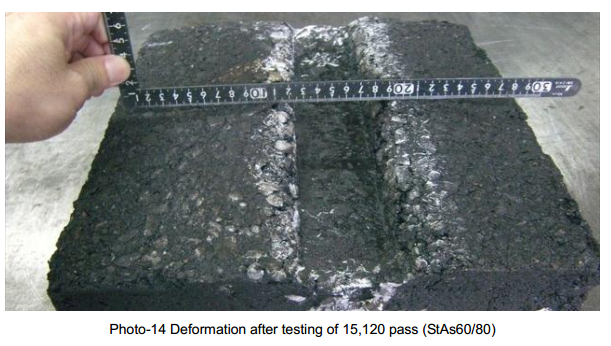 6. Verification of risks about the solubility

In case of adopting the plant-mixing method, the modifiers used for this method need to melt on the mixing condition at an asphalt plant, like at 180 °C and for about 45 second. However, the mixing temperature at an asphalt plant might fall below 180 °C. Therefore, the test temperature of MFR is set lower like 160 °C although the normal test temperature is set to be 190 °C. If MFR of the modifiers which is used in Plant-mixing method is high at 160 °C, some risks about the solubility might remain. 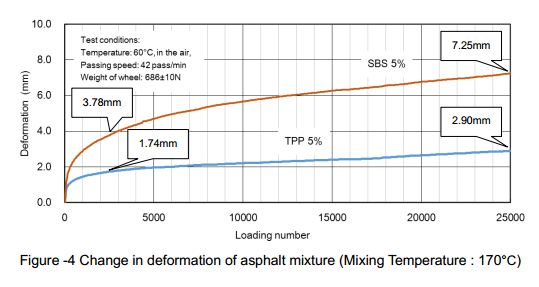 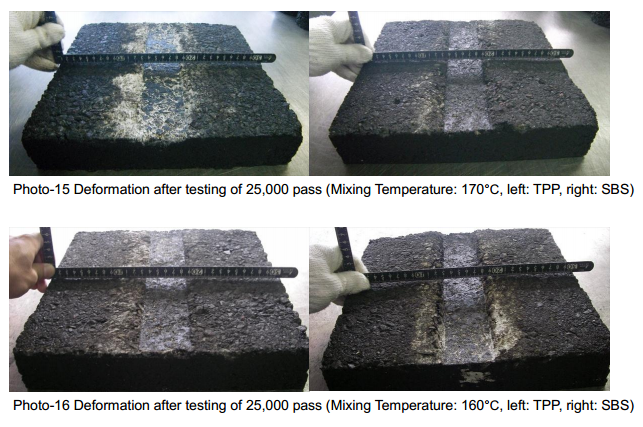 The test result of SBS is higher than we have expected in the beginning because we are sure SBS isn’t suitable to the use in plant-mixing method. Actually, if SBS of 5% has been melted into asphalt perfectly, the DS should be higher than that of TPP. Even under this situation that we used the mixer which has significantly higher mixing energy than that at actual asphalt plant, DS of SBS is only 4500. This means a lot of un-melted SBS remains in asphalt. It means un-homogeneous asphalt has been employed in this mixture. That is, foreign organic material is contained in asphalt. I’m sure you know what this would bring to asphalt pavement in future. It would be deterioration like cracking, potholes, fretting and others.

At actual asphalt plants, can we ensure the mixing conditions like temperature, time and others? If the mixing capability of an actual asphalt plant is lower than the experimental mixer as we are worrying, the rutting resistance would come down, and more foreign material which is un-melted SBS remains in asphalt, the severer problems might be brought.